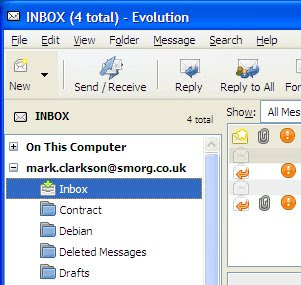 I've been waiting for Evolution for Windows for a long time and now I find out it's been around since August 2008 for this easy-to-install version, and even further back to Jan 2008 for other versions, how time flies! If you don't know what Evolution is then let me tell you - it's the default email and calendering solution for Gnome, but you probably know that already right? I only really use the mail client but there's nothing better for me, it's just so 'clean'.

Now, on Windows, there's no decent IMAP client around so when I'm forced to use Windows I have to use Outlook Express, which works well with IMAP, or a Web Browser (Outlook is awful at IMAP). But now, I can use my favourite email client on Windows too!

Well it crashed a lot at first but now that I have disabled the exchange plugin, in Edit->Plugins, it works like a dream. Initial load time is poor, about 45 seconds on an old 1.4Ghz notebook but once it's loaded the responsiveness really is very good.

Being a Gnome port the User Interface is not native and may feel a little odd to Windows users, although there are a surprising amount of native looking controls, but isn't that one of Window's greatest features? I mean every program looks different on it anyway, imposing its own colours, font-sizes, clever new buttons etc. This is one of my oldest Windows gripes, but I'm not anti-windows, I just really like Gnome and apps that behave the way *I* want them to. Long term Windows users usually don't see this as a problem in my experience so Evolution should feel okay to them I guess.

I'm afraid I won't be able to test this on Windows much, as I don't use that OS often, but my Dad has volunteered to test it. I wonder how this will turn out...
Posted by Unknown at 18:07

Email ThisBlogThis!Share to TwitterShare to FacebookShare to Pinterest
Labels: Software