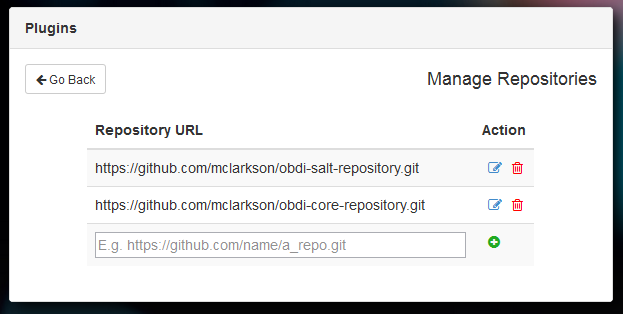 Obdi 0.1.4 is a little bit delayed. I had set a deadline for today but I hope to get it out this weekend.

The screenshot shows the new Manage Repositories page where private or public repositories can be added. The repositories hold a file named repodata.json which contains the URLs (and other information) to other git repositories that contain the code for Obdi plugins. I haven't added the ability to add private keys yet but it should be possible to do this manually.

Code for choosing and loading plugins is progressing well and the plugins have now been taken out of Obdi and have been put into their own git repos.

As a little explanation for why this release is late I've been working with Docker, CoreOS, LXC with unprivileged containers (yay!) and other fun stuff, and it looks like Obdi fits for managing these pretty well. I really want to support these technologies in a generic way so users are not tied to any particular distribution or container technology to use these great tools. I'm coming to the conclusion that configuration management complements these tools, taking a central role, rather than being replaced by them and creating another great big mess [of images, baked-in configurations, other configuration files, dockerfiles, hacks, command line arguments and mixtures of operating patterns stored all over the place].
Posted by Unknown at 23:50